Posted on January 5, 2020 by othermindpress 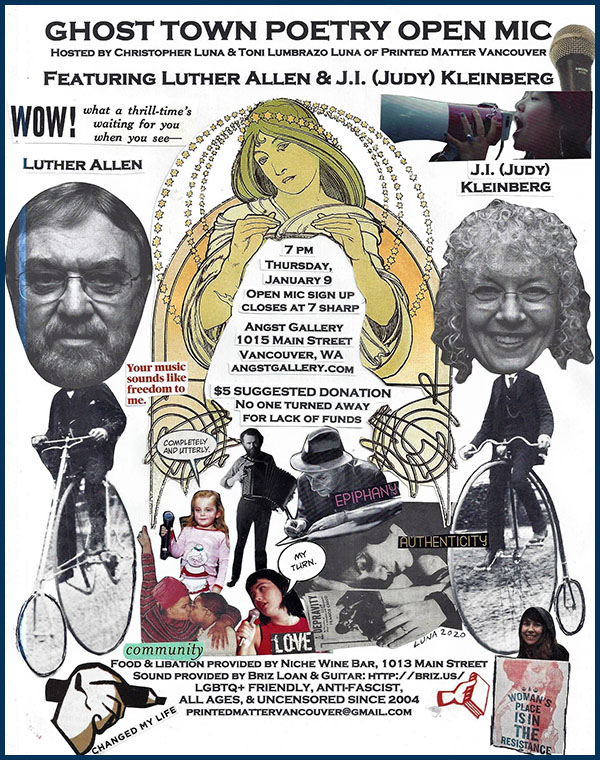 Hope to see you there.

Posted on November 2, 2019 by othermindpress

As a part of her tenure as Washington State Poet Laureate, Claudia Castro Luna has created Washington Poetic Routes, “a digital poetry-mapping project that explores Washington’s rich geographical terrain, both in terms of landscape and in terms of the human relationships that unfold across the State.”

At the Washington Poetic Routes website, each clickable red dot on the map marks a site-specific poem. I’m honored that my poem, dropping down the west side of the cascades (see below), is included at Stevens Pass.

As an unexpected bonus, Claudia Castro Luna just notified me that my poem will be one of eight selected from the WPR project to be made into a broadside. The selected poems will be hand-printed by a team of eight printers at the Seattle School of Visual Concepts, each printer working with one poem. The poems will then be assembled into 50 portfolios that will go to Humanities Washington, which supports the Washington State Poet Laureate program and is covering production costs. The broadsides should be complete in early 2020.

dropping down the west side of the cascades

Posted on September 14, 2019 by othermindpress

SpeakEasy 26: Reading Bertolino presents an evening of poetry written by James Bertolino. Jim’s poetry has been published internationally in hundreds of magazines, scores of anthologies, and dozens of books over the past 50+ years. He holds an MFA from Cornell University, has won numerous awards, and taught creative writing for more than 36 years. Jim’s first book was published in 1968, and his recent publications include Ravenous Bliss: New and Selected Love Poems (MoonPath Press, 2014) and Last Call: The Anthology of Beer, Wine & Spirits Poetry (World Enough Writers, 2018), which he edited. Bertolino’s poem “A Wedding Toast” was featured on Ted Kooser’s syndicated column, American Life in Poetry, on June 29, 2019.

The free, public event will be held at the Mount Baker Theatre Encore Room on Saturday, October 5, 2019, at 7:00pm. Please join us as we honor this prolific and influential poet.

Posted on September 5, 2019 by othermindpress

You’re invited to a poetry reading and awards ceremony on Friday, September 6, 2019, as Luther Allen’s winning poem is installed as the fall feature at the Poem Booth in downtown Bellingham.

The celebration starts at 6:00pm at the Downtown Coop.

On Saturday, July 20, 2019, at 4:00pm, SpeakEasy 25 presents PIG TALES: a passel of poetry, featuring the extraordinary words of the “Pig Poet,” David Lee, along with Paul Hunter. This will be an outdoor event at Alluvial Farms, 6825 Goodwin Road, in Everson. Please bring a chair and sun protection. Farm tours will be available and pastured pork will be for sale (bring a cooler if you’re interested).

Posted on March 3, 2019 by othermindpress

SpeakEasy 24 is very pleased to offer a selection of readings from the new anthology, For Love of Orcas (Wandering Aengus Press). Edited by Andrew Shattuck McBride and Jill McCabe Johnson, the book addresses the plight of the southern resident orcas, chinook salmon, and their extended ecosystem. Intended to honor these endangered animals, educate readers about how to protect them, and support their restoration, the book’s proceeds will be donated to The SeaDoc Society. Mark your calendar and plan to join us for SpeakEasy 24: For Love of Orcas, Friday, May 3, 2019, 7:00pm, at the Mount Baker Theatre Encore Room in Bellingham, Washington. See the complete lineup on the SpeakEasy page.